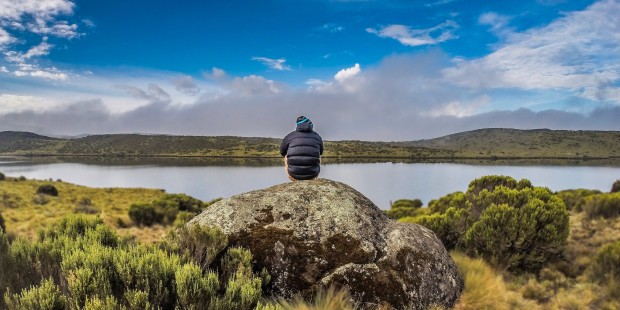 She was done, beaten, empty. I could tell, I had spent the last year or so guiding people up this mountain and I had learnt the signs when someone couldn’t go any further.

“I cant do it” she sobbed, her words only just audible over her tears. “Come on darling, just make yourself sick, then you’ll be fine” encouraged competitive Dad. I’d seen and heard enough, I called the father over.

“She’s not going to make it, so she’s going down” I told him, I presented it in a clipped voice, just so he knew that this wasn’t a discussion. To his credit he accepted it immediately and accompanied his daughter with one of my guides back to the camp.

Meanwhile I turned to look up and see the rest of the 75 clients I was responsible for, all with head-torches making a long line snaking away from me.

It was day four, summit day and the toughest part of climbing Mount Kenya. I had woken them up at 2am, which although officially in the morning seemed just like the night before. I had lined them in the dark at 3am and started the climb. It was cold, the biting mountain wind cutting through most jackets. But you warm up, its continual walking uphill on slippery scree. Huge drops swooping away on both sides, but luckily its dark so they are mostly unaware and are just in their own little battle with their footsteps.

I looked at my watch, there are certain checkpoints along the way so I can tell if we will get there on time. I have a cut off, if the slowest cant make it in time they get turned around.The summit, people forget, is only halfway. But we are doing good enough.

Im always placed at the back of the group, I have to decide if people cant go on, I hate doing it but thats my job. I always try to give a well done speech, that you’ve managed higher than anywhere in Europe. But however I deliver they are always crestfallen.

But tonight I have a strong group. As the first light of dawn starts to redden to our left, I start to relax a little, I know soon the equatorial sun will warm my clients, that their moral will lift, that they will see the summit and then push on.

Ive been blessed. In the last 18 months I’ve climbed this mountain 15 times, its never the same and its beautiful. I adore the moment when I get to the summit and see all the pleased faces, the posed photos, the hugs. Its nice to be there to facilitate peoples dreams.
I also know I have a long day ahead. We have 18 kms to walk to the camp, and there will be slow clients, and it will be me to walk with them.

But alas it is time to move on. The only time I will come back here is for personal climbing, my tenure as a guide has come to an end. Its been my choice, but as I am the last to descend from the summit I know that its an end of what has been a wonderful era.

I take a small snack bar from my pocket and just steal a few moments looking at Batian and Nelion the two majestic peaks, while I dangle my feet from the third highest peak Lenana. The peaks named after 3 tribal chief brothers of long ago.

My last lunch with the three chiefs…